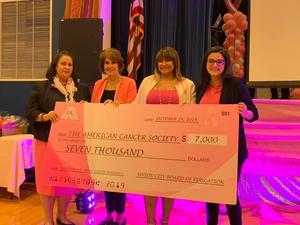 More than 1,000 residents and students turned out recently to celebrate Breast Cancer Awareness Month in Union City and to award the American Cancer Society a check for $7,000, all of it contributed by district employees.

Colin Powell Elementary School was awash in pink colors for the annual event––Let’s Tie One More Ribbon for Breast Cancer––that featured important information provided by noted area doctors who specialize in breast cancer, as well as breast cancer survivors.  There were also informational tables sponsored by local health care organizations, live entertainment, an art exhibit created for breast cancer awareness, and a raffle with dozens of prizes.  Refreshments were provided by the Union City Education Association.

As in past years, the event was created by Director of Community Relations Mercedes Joaquin and her staff.

Ms. Joaquin told audience members that they should get regular mammograms and conduct self-examinations on a regular basis.  “We can fight this terrible disease,” she said, “but we have to have regular checkups.”

Mayor/Senator Brian P. Stack, who announced that his civic association would also contribute $1,000 to the American Cancer Society, thanked the entire district for its efforts and support.  He also urged audience members who may need help with health care, especially mammograms, to contact his office “and we will get you help, whether or not you have insurance, and if you need a ride, we can do that as well.”

Union City Poet Laureate Jorge Luis Seco and Nancy Aleman of the American Cancer Society, who is also a breast cancer survivor, were also among the speakers.

Ms. Joaquin thanked the school principal, Teresita Diaz, and her staff for all their hard work in hosting the event, and Superintendent of Schools Silvia Abbato and Assistant to Superintendent Dianne Capizzi for their help in fundraising and providing the support needed to organize the event.

More than three million women in the United States have a history of breast cancer, and, on average, one in eight women will develop breast cancer during their lives, according to national statistics.